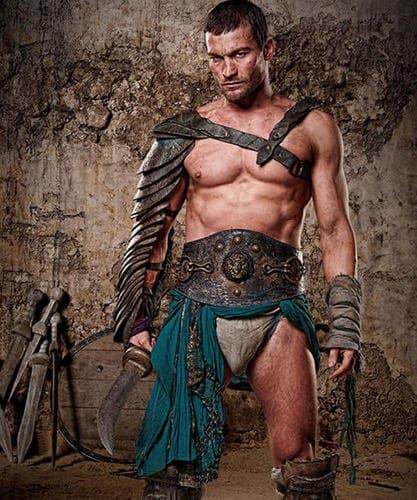 Gotta get lean and muscular for that prize acting role?  Need to lose fat fast? Ditch the aerobics and pick up the dumbbells and go, go, go with metabolic circuits.

Late Welsh actor, Andy Whitfield in his role as Spartacus

OK, BEFORE you runners and bicyclists run/ride all over me with evidence about how all those aerobic miles makes you lean, pumps up your metabolism and gives you great cardiovascular health to boot, let me explain.

What I’m up to here is not to disparage the value of aerobic exercise.  I believe in its value.  I just think that science has it right when it proclaims that the most efficient and effective way to get rid of body fat is to perform weight circuit training.

Adam Campbell in a Men’s Health article entitled Lift to Lose underscores this point in a compelling way.

He follows the money.

On which type of exercise would the moneymen place their bets if the goal were fast, assured fat loss?

In effect, this is done every time a soft-bodied actor is slated to play the role of some lean muscular bruiser.  The actors are not told to train for a marathon.  They train with weight circuits.  Metabolic circuits.

It takes a whole lot of money to make a TV series or movie.  When the part requires buffness, and buffness must be quickly built and maintained, there’s a tried-and-true technique.

Mr. Campbell cites the example of the late Welsh actor, Andy Whitfield, who played the lead in the Starz television drama, Spartacus: Blood and Sand.  Whitfield’s costume was a revealing toga and his character was a badass.  He had to look the part.  He had to be lean and muscular.

And he had to build and maintain that body under a severe time constraint, because he was on the set for 12 hours a day.

So, what does Andy Whitfield do?  He paid attention to exercise experts like Jeff Volek, Ph.D.

Dr. Volek studies this sorta thing.  He does not dispute that aerobic exercise burns calories and will result in fat/weight loss.  What he does dispute is the contention, though time-honored, that aerobic exercise the superior way to lose fat.  And he has good reasons for his point of view.

Being the able scientist, he tested it.

What Dr. Volek did was to put overweight people on a reduced-calorie diet and divided them into three groups:

The results of the study were that each group lost about 21 pounds of weight over 12 weeks, but with one very important difference…

*The weight lifters shed five more pounds of fat than those who didn’t pump iron. The weight they lost was almost pure fat, while the other two groups shed 15 pounds of lard, but also gave up 5-plus pounds of muscle.*

From a fat-loss perspective – not a total weight perspective – the weight lifters lost almost 40 percent more fat, because all of their weight loss was fat and none was muscle.

This result is not “out of the blue”.  It gets replicated study after study.

Research on low-calorie, no muscle building dieters shows that, on average, 75 percent of their weight loss is from fat and 25 percent of it is muscle.

That muscle is hard earned and is worth keeping around as you try to lose some fat.  In fact, muscle is a key contributor to maintaining (or increasing) you metabolism, which, of course, helps burn calories.

Muscle also is what picks you up off the floor, climbs the stairs, attracts a mate (maybe), or climbs a rope (if only).

You do not want to toss muscle out with your fat. (Definitely!)

One eight-minute weight lifting circuit of eight exercises can use 159 to 231 calories — the same as running at a 6-minute-mile pace for the same duration.

I don’t know about you, but in eight minutes, I can do an eight-exercise weight lifting circuit… I cannot, however, run 1.3 miles.

Results From The Real-World

Let’s get out of the lab and peek into your world, the real world.

Rachel Cosgrove and her husband, Alwyn, own a health club, Results Fitness, in Santa Clarita, California.  Over the years, the Cosgroves have risen to the top of the fitness industry due to their clients’ successes.

“As time went by, we began to drop aerobic exercise from our fat-loss programs altogether. And guess what? Our clients achieved even faster results.

“Our average client has to be in and out of the gym in 45 to 60 minutes and has only 2 to 4 days a week to exercise. We design workouts to optimize that time.”

At this point, you should not be surprised that the Cosgroves rely on “metabolic circuits.”

Metabolic circuits are fast-paced weight-training routines in which you alternate between upper and lower-body exercises.

The central idea is to maximize the amount of time you can sustain the maximum effort.

Yes, you can go all out in a 30-second sprint, but for how long could this be sustained?  The rest periods between sets would, by necessity, get longer and longer and your body would become completely fatigued too soon to maximize the fat lose benefit.

[Check out the 20-minute Bust Your Butt, HGH-producing workout in my post, How to Boost Your Human Growth Hormone in 20 Minutes!]

With metabolic circuits, you’re emphasizing different large muscles in each compound (non-isolating) exercise, and thereby can maintain a high-intensity effort for a much longer duration, with minimal rest.

The result cannot be better summarized than does Mr. Campbell, the Men’s Health author, who states:

“… the muscle-saving, calorie-burning benefits of intense resistance training and sprints, combined with the nonstop movement of long, steady-state aerobic exercise. It could be the greatest fat-loss workout known to man.”

And, I imagine, given his enviable results, Mr. Whitfield, the Spartacus actor, couldn’t have agreed more.