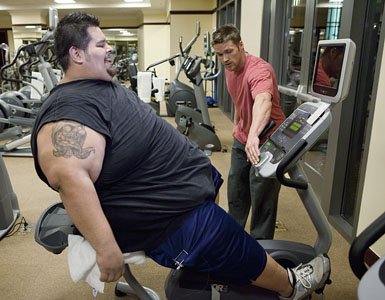 Extreme Makeover’s trainer Chris Powell inspires people to lose hundreds of pounds through his “FITT” exercise program. Here, I present a woman who shed 130 pounds (and counting) by following Powell and FITT.

IT SEEMS to me that there’s a perfectly good reason why people get so confused about which diet or exercise routine is best for them.

You read or watch some presentation of a certain group of foods you could eat (and not eat), or a particular exercise regime you could huff and puff over, and you wonder if it will work for you.

Yes, of course, you’ve noted that such and such has worked for Jane and John Doe, and perhaps thousands of others; nonetheless, you wonder…

“Is it worth trying?”

It could be that this doubt and hesitation is an excuse to stay mired in whatever you’re doing (or not doing) that’s not working for you.  Or it could be a legitimate question that you need to answer in the affirmative in order to compel yourself to change.

Cause change is hard.  Entropy makes it so.

Unless you have a shrink or a really good companion you can’t bluff, only you can determine if you’re excuse making or legitimately confused when presented with a seemingly perfectly good scheme to change behavior.

It makes sense if you’re confused.

We’re all different.  You know that.  And so you know that because, basically, few people are just like you… the same age, gender, fitness level, lean body mass, health conditions, psychology, access to certain foods and equipment, etc… that this diet and/or exercise routine you’re considering may be great for Ms. Doe, but not for you.

I guess it would be really helpful if some definitive study was done that could conclusively typecast, say, 20 different sets of people, each set comprised of the same attributes.  Then the ideal diet and exercise routine could be prescribed for each of the 20 sets.

Well, to my knowledge, this has yet to be created.  Which means, you’re left to taking a deep breath and plowing into the information swamp, hoping to get clear about what’s best for you.

Which (somehow) brings me to “choose to lose” Chris Powell’s “FITT” concept.

Chris Powell is a fitness trainer on ABC’s Extreme Makeover: Weight Loss Edition.  In a recent post on Yahoo/ABC News, a woman named Dana Atkins, who was inspired by Mr. Powell to exercise and diet, was profiled.

The title of the post shouts: “Inspired by Chris Powell, Woman Loses 130 Lbs”.

I have a couple of family members who have struggled with weight, which has made me sympathetic to the plight of those who carry large amounts of excess poundage on their frames every second of every day.

Over the years, I’ve watched how my relatives compensate for this extra load: moving slowly, seldom; sweating over small exertions; needing to concentrate and commit their will to stand up off the couch.

So, when I read about how someone well over 100 pounds overweight was inspired to finally do something about it, I’m curious.

Dana Atkins lost 130 pounds by learning what she could do from watching Chris Powell and then doing it.

A lot of overweight people watch Extreme Makeover.  But few lose weight by taking what they learn by watching it, and then applying it.  As I know from some recalcitrant, perennial issues in my own life, identifying a problem and knowing the solution is very different than actually executing the solution.

The “Just Do It” Thing

As you’re probably aware from dealing with your own stuff, the bottom-line issue is often not what you don’t know that keeps you from achieving what you want.  Instead, it’s what you know that you don’t do that hold you back.

Dana Atkins was probably obese her whole adult life.  Now 36 years old, something clicked that enabled her to finally do something about it, to execute what she already knew.

A friend of mine likes to paraphrase William Blake, who said something like:

“Execution is the chariot of genius.”

For Ms. Atkins, that chariot finally arrived one day as she was watching Extreme Makeover. She said this to Chris Powell:

“I was watching your show one day, and I thought, ‘if these people can do it, so can I.’ And so I thank you. You have no idea how much you inspired me.”

Dana Atkins went to the gym five days a week, cut and counted calories using an app called Lose It, began eating breakfast every day, and not eating carbs after 5:00 PM.

We all need inspiration, something to help us push through the tough times.  For Dana Atkins that was Chris Powell’s voice and image.  When her energy would begin to crash, she’d imagine Mr. Powell beside her, urging her on.

She began her road to fitness at 380 pounds, a weight that would keep most people firmly affixed to the couch instead of struggling on a stationary bike.  But as one day follows the next, Atkins persevered and went from 380 pounds to 253 and a size 30 to 18.

By her own measure, she has a long way to go, but is confidant that by consistently applying Chris Powell’s tips, she’ll reach her destination.

Mr. Powell promotes the FITT concept, one that recognizes that in order to become fit, your body needs to be challenged with workouts that get progressively harder to do.

Initially on the weight loss journey, fat commonly comes off quickly in response to diet and exercise.  This is because our physical systems (cardiovascular, muscular, respiratory, etc) are extremely inefficient.  Being inefficient, our bodies require more calories in the beginning of a new health regime than later on when it adjusts to the new tasks performed.

If you do not increase the exercise workload, your body will get too efficient and comfortable doing it. Over time, that 15-pound dumbbell you once struggled to heave over your head 10 times can now be done easily.

So, now the trick is to not let your body adapt to the exercise.  It needs to be consistently challenged. You do this in various ways that Chris Powell refers to as “FITT”.

Frequency.  If you typically exercise three days a week, increase to four days.

Time. If you typically exercise for 30 minutes, increase to 35 minutes.

Type.  If you typically jog for exercise, try a different type of exercise like rowing, cycling, or boxing.

As I wrote at the start of this post, we’re all a bit different and respond to the same thing differently.  With this in mind, I’d like to add some considerations to how you may apply FITT to your exercise routine.

All of FITT’s four components – Frequency, Intensity, Time and Type are interrelated, often inversely.  For instance, the greater the Frequency of the same set of exercises, the less the Intensity can be.  This is because most of us need more time to recover from an exercise done intensely than casually.

If, then, you decide to increase all four components of an exercise routine simultaneously, you’re likely to find that can’t maintain the regimen.  After all, in this example you’ve increased Frequency and Intensity and Time, and have also introduced a new exercise Type for which you’re not yet conditioned.

Again, without knowing your unique attributes, and specifically what your exercise routine is, it’s hard to suggest exactly how to progress as your body gets conditioned to your current exercise regime.

That leaves you.  You need to experiment.  If you increase Intensity, at first you may have to maintain your current Time and/or Frequency, or even reduce it a bit until your body is ready.  Or if you increase Frequency or Time, you may need to continue on with your current Intensity level for awhile.

The bottom line: Don’t let the uncertainty of a new system of doing something – diet, exercise or something else – keep you from trying it.  A mentor of mine likes to say:

“A human being’s purpose is to make known the unknown.”

So, if some new diet or exercise routine makes sense, is touted by someone you trust, and others are achieving their dreams… try it, and make the adjustments you need along the way. Beats sitting on the couch.