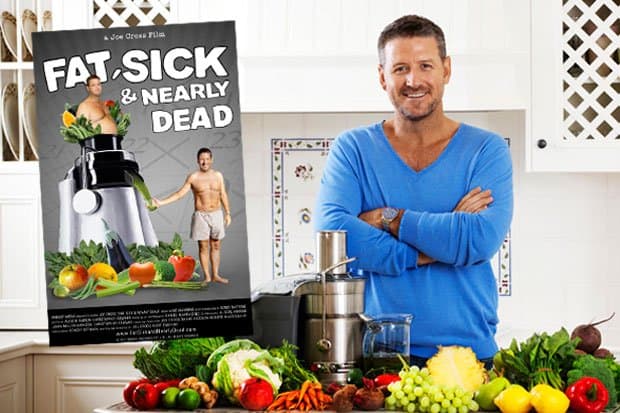 Joe Cross and the “Reboot Plan”, made famous by his documentary, Fat, Sick and Nearly Dead, has changed countless lives for the better.  Those that began juicing have lost weight, detoxed, reduced medication and became more mobile.  Hundreds have sent Joe video messages of appreciation.  Here are some.  Watch, learn, be inspired.

MY POSTS about the Reboot Plan that was featured in the popular documentary, Fat, Sick and Nearly Dead are among the most visited on this humble site.

There’s good reasons for this: Fat, Sick and Nearly Dead demonstrated how some very ill and overweight people could dramatically change their lives for the better by drinking homemade vegetable and fruit juice.

During the year since the documentary was released, many thousands of people have been inspired to juice, me included.  While it’s true that I first began juicing decades ago, I wasn’t consistent.  Watching Fat, Sick and Nearly Dead got me going again.

I bought the same juicer

that Joe Cross, the documentary’s producer and featured fat-sick-nearly-dead subject, uses, and between grabbing veggies from my garden and buying them at Whole Foods, I began juicing nearly every day.

(Joe Cross and his documentary side-kick Phil collectively lost over 300 pounds on their Reboot Diet.)

Now, frankly, I don’t have some wondrous tale to tell about how juicing saved my life or made me buff, because I wasn’t sick or out of shape to begin with.  But there is that clarity of mind and energy that comes even to us that are healthy.  To those that aren’t healthy to begin with, the benefits of juicing are extraordinary.

You need not take my word for it.  April 1 was the one year anniversary of the theatrical premiere of Fat, Sick and Nearly Dead.  He’s no fool, but Joe Cross sent out an email that day to those on his list, and included in it a video of people whose lives were so improved by juicing that they sent Joe videos of expression.

If you need an extra nudge to begin a health program, or just like to watch people joyful expressing their successful journeys to health, watch:

Have you experienced juicing? If you have a tale to tell, tells us in the Comments section below.

For more about eating right, check out my post, Diet 101.

–> Here’s my pitch about the need to know your supplements. <–

Lastly, below is the Breville Juicer that Joe Cross and I use. (I also use the Champion Juicer and compare the Breville to it in the article, A Kick-Ass Reboot Juice Habit for You.)