Do you have children who think all tasty food comes from boxes, plastic and cans?  Well, let them watch these youngsters discover the savory delights of juicing with two high tech devices — the Breville Juicer and Ninja Professional blender.

OK, there’s a few things mentioned in the video worth expounding upon…

Those blades are super sharp, and given that there’s three sets of two anchored on a center spindle, rather than the typical set of two blades at the bottom, any reasonable food that gets put in there is likely to get blended.

The Ninja takes some getting used to, and you must be present when dealing with those blades — absent-mindedness will come at a price.  The top locks on after the center of the top is aligned with the top of the spindle.  And the container twists and locks onto the base.

Here are some pics of the Ninja Pro that will show you close-ups of the blade spindle, blender cover, and how the blender container gets set onto the base: 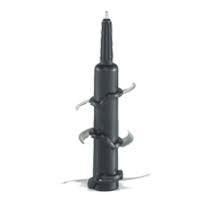 The Breville Juicer became famous by the promotion of Joe Cross, the fella behind the documentary, Fat Sick and Nearly Dead.  In the film, Joe Cross and his sidekick, Phil, together loose over 300 pounds on their Reboot Diet consisting of fresh vegetable and fruit juice.

And the machine that makes it all possible — other than giving them the will power — is the Breville Juicer.

The one I have is the Breville 800JEXL Juice Fountain Elite 1000-Watt Juice Extractor (whew, whaddya name), which I bought from Amazon (to which that long name is linked).  I just took a look and it’s nice to see that it’s on sale as I write this.

If you’re debating which juicer to get, check out my comparison of the old tried-and-true Champion Juicer with the Breville. I have both and like each for different reasons.

The review is here: A Kick-Ass Juice Habit For You!.

Well, they’re pretty much like most kids in America, in that they both have a highly-tuned sweet tooth. (Actually, several of them.) However, perhaps unlike many — if not most — kids in this fair land, these have parents who indefatigably present them with good food options.

This juice stuff is a good food option, but like I verbally stumbled through in the video… beware consuming a lot of it.

This juice that you make yourself, fresh from clean organic fruit, is a good thing in moderation.  Surely, it beats soda. But moderation is key.

When you remove the juice from the fiber in fruit, what’s left is a tasty but sweet, sugary drink.

The more sugar that’s ingested, the harder your pancreas must work to produce the insulin to shuttle that sugar into the bloodstream. Do this too often and your insulin desensitizes such that it no longer properly responds to or is capable enabling the body to properly utilize the sugar. So it gets stored.  We get fat. And on a fast train to metabolic syndrome.

If you’d like to read more about just how pernicious sugar is, please read What’s Making Us Fat And Sick.  It begins thus:

“Is sugar evil? Here I examine why sugar and other high glycemic carbohydrates have been eviscerated, and examine if this is deserved. A nation now eating 20+ times the amount of sugar than in the late 19th century, with a concomitant spike in obesity, needs to know the truth.”

No Benefit to Time-restricted Eating?