Why Overpopulation Trumps Everything Else. Everything! 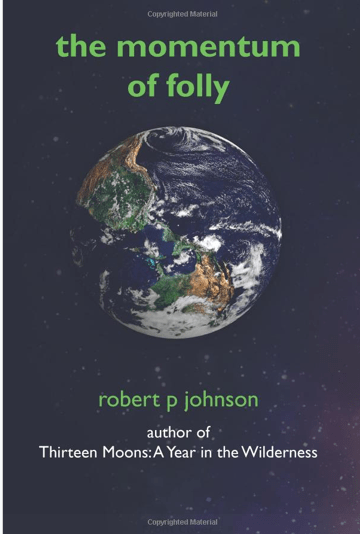 Robert Johnson, screenwriter, book writer, feckless soccer coach and player, ordinary citizen, gives a damn about too many humans spoiling the earth and the future of his children, your children.  Here he tells you why you should too.

"the momentum of folly" by Robert Johnson

ONCE UPON a time, not so far away, but a long time ago, Robert Johnson and I (hardly) studied at the same University in Santa Barbara, CA. Afterwards, he bummed around for a while, earned a Masters degree in some kinda writing thing at UCLA (and won a prestigious screenwriting award in the process), and eventually ended up back in Santa Barbara where he continued to write screenplays, books, help raise a family, and — in so doing — become agitated about the world his two sons will inherit.

Over time, Robert’s angst about general issues the world faces has distilled, rightly, down to one incipient cause: Humans have eclipsed Bunnies… there are simply, and will continue to be, too many of us!

Being the creative type, Robert wrote a book about what some particularly boldly aggressive, distraught scientist did to reduce the human population. It’s a thriller. But before I get into that, I’m going to here publish an email that Robert sent to every friend he has — all three — as well as to his wife’s many. (She’s a Realtor, after all.)

So, first I’ll present Robert’s email (with a touch of word emphasis by moi), and then — happily — plug his books. (Cause he writes really, really well.)

Why You Should Care About Overpopulation, by Robert Johnson

I post this out of the simple frustration that our rampant growth continues virtually ignored by politicians and religious leaders.  Verily, even though overpopulation is arguably our single greatest threat — not only to the environment and all life as we know it, but also, ironically, to humankind itself — it is doubtful we’ll hear it so much as mentioned during this election season.  The reason for this is understandable; politicos and clerics alike don’t want to offend their base with an issue that might be construed as hindering their flocks from their rightful pursuit of happiness.  But here are some simple facts on the matter:

• 2.37 humans are added to the planet every second, that’s 4.17 births less 1.80 deaths.
• 250,000 are added each day, roughly an Orlando, Florida.
• 80 million, or the equivalent of a new Germany, are added each year.
• A full billion are heaped on every 12 to 13 years, which is akin to finding the room and resources for a new China every decade and a half, with one-third of them malnourished.
• And as a result of the subsequent habitat loss incurred by our expansion, an average of three animal species are lost to extinction every day, with the prediction that up to 40% of all flora and fauna species extant today will be extinct by the close of this century.

Now, even though it is likely our population will peak sometime this century — the most conservative U.N. estimates say at 9.4 billion by mid-century, others cite figures of 12 billion or more by 2100 — the fact remains we are already well over a sustainable carrying capacity.  To wit: in order to sustain our present 7 billion we would basically need one and a half Earths to keep up with the resources we currently consume, and this even while China and India and much of the developing world have yet to become fully industrialized, which they soon will.  If I didn’t have two children of my own this wouldn’t keep me up at night, but I do so it does.

Regrettably even our schools largely avoid the topic of overpopulation out of fear of offending anyone, and this despite the fact that all efforts to curb such threats as climate change, species extinctions, habitat loss, immigration, fishery depletion, oceanic “dead zones,” arable land degradation, human rights abuses, fresh water shortages, urban sprawl, famine, terrorism, and even war itself, are each largely futile as long as our numbers continue to grow.  Similarly, such noble and necessary efforts as alternative energy, conservation, recycling, carbon off-sets, endangered species protection, humanitarian relief, etc., are equally futile unless coupled with a vigorous campaign to reverse our numbers.

So what is the Earth’s sustainable carrying capacity? No one really knows exactly but most experts agree it is around two billion at our current global average per capita consumption levels — just two.  Most scientists and even politicians know all this, but most people, the vast majority in fact, haven’t a clue.  This is the reason why I am writing this likely futile, little post; in the hope that the magnitude of our reckless growth — “the momentum of folly” as it’s been termed  — becomes known to as many people as possible, so that we might — just maybe — reverse this trend before it’s too late.

And how do we reverse our rampant growth? It’s actually quite simple.  First we need to make as many people as possible aware of the mathematics of overpopulation; such as the fact we numbered barely one billion as recently as 1805, whereas today we are well over seven billion.  Secondly, we need to educate people to the fact that overpopulation is the primary factor behind just about every one of our problems, be they societal or environmental.  And lastly, we need to establish a voluntary two-child limit for every woman or man regardless of race, creed, or nationality.  Just two.  And should we choose to have just one child, or none, or choose to wait until after the age thirty to start procreating — causing there to be fewer generations sharing the planet at the same time — well then, so much the better.

So, towards this optimistic if naive goal, please pass this information along to a handful (or even just two) of your closest friends or loved ones, and hopefully we can spread the word about the dire consequences of overpopulation before it really is too late.  “Just two kids, just two billion; we can live with that.” Thanks.

and Thirteen Moons: A Year in the Wilderness

A Bit About Robert Johnson and His Books

Robert P. Johnson was born and raised in Oakland, California, then relocated to Lake Tahoe where he ski-bummed, river-guided and swept chimneys before relocating again to “Hollywood.” After earning an MFA from UCLA’s Department of Film, Theater and Television, he worked as a screenwriter, winning First Place honors in both the Samuel Goldwyn and Jack Nicholson Screenwriting Awards. He currently lives in Santa Barbara with his wife and two children — just two.

Here’s a summary of Robert’s book, the momentum of folly (yeah, guess he hasn’t found the “Shift” key for capitalization):

A fledgling CDC virologist ventures into the Guangdong Province of China as part of a World Health Organization influenza reconnaissance field team to search for the upcoming season’s newest flu virus for vaccine production. While there his team stumbles upon a particularly virulent strain packing a 70% mortality rate in a localized outbreak. While attempting to return from Asia with the isolated virus our protagonist discovers the nascent pandemic is actually the very intentional machinations of a handful of otherwise altruistic scientists who have reluctantly come to the consensus that the only hope to save the Earth’s environment and stave-off the extinction of some 40% of its species by mid-century — and ultimately the extinction of humanity itself — is to cull the population back down to a sustainable number as quickly as possible. Acknowledging the scientists’ reasoning, our protagonist is then faced with the quandary: whether to blow the whistle on the conspiracy in an attempt to contain the outbreak before it kills off two-thirds of humanity, or to simply let it run its course, and possibly save the planet by so doing.

OK, so other than the links to his books below, this is it. You’re informed. What you do with the info is up to you. You could Facebook this post, buy Robert’s book(s), chat about this at your next dinner party, stop procreating. Whatever.

If you have a idea or two about overpopulation, or wish to share your thoughts, weigh in at the Comments section below.