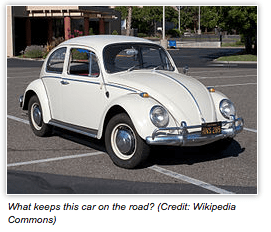 Few of us are lucky to have been born Mercedes Diesels, famous for their long lifespan. Instead, most of us are more like VW Beetles, where how we choose to drive our life — our lifestyle habits — will eventually overwhelm our body’s gearbox, engine and transmission, sorta speak. Don’t worry — plants to the rescue, say anti-aging researchers.

HARDLY A day goes by when I don’t see some old VW Beetle chugging along.  Many are quite old; well past the lifespan envisioned by their designers, and so it can be with your lifespan as well.

Although the average life expectancy in the U.S. is 78.5 years, there are plenty of centenarians chugging along the VeeDubs, in a manner of speaking.

Mostly due to its large overall population – certainly not its fantastic health care — the United States currently has the greatest number of known centenarians of any nation, estimated at 70,490 on September 1, 2010.

Even at seventy thousand plus, centenarians are rare in America, and in every society.  Obviously, it’s in our best interest that the rare part becomes rare. Thus, the gerontologists are busy studying the matter, trying to answer the question that distills down to:

Read Want Longevity? 5 Alternatives to a Calorie Restricted Diet, Why It’s Critical that You Muscle Up as You Age, and a plethora of other long-tooth musings relative to your lifespan may be found in the “Age Better” topic in the sidebar.  Just click “Age Better”.

There’s one basic, conceptual answer to that question about your lifespan, and it is this:

Let me explain, and this goes back to why there are 50-year-old VW Beetles still on the road…

If you read much on the longevity topic, you’ll soon trip over the adage,

“Genetics loads the gun, but behavior pulls the trigger.”

The idea here is that although you may have a genetic predisposition for hale health, or its opposite, your behavior (ie choices made about eating, drinking, smoking, exercising etc.) could enhance that predisposition.

Your behavior can accentuate the positive or negative expression of your genes, just as changing the oil, repairing rust and tuning up the VW keeps it alive even if the sheet metal and other parts used for make it was a bit fragile to begin with.

The scientists who study this stuff know that specific behaviors can help you live a longer and more satisfying life by, in effect, turning on (expressing) the genes that enhance lifespan.

Turns out that there are groups of people who practice each of these (and more!), as if it’s a religion.

That’s because it is.

The 7th Day Adventists, mostly centered in La Loma, California, are people who subscribe to the notion that Jesus Christ is their Savior.  Nothing unusual about that among Christian sects.

But what this group does that’s remarkable is that they not only perceive their bodies to be a sorta like a temple, but practice it as well.

After all, you don’t desecrate your temple with junk food.

Given this belief system and the practice of the six longevity traits cited above, 7th Day Adventists live longer than their fellow Californians by 6.1 years for women and 9.5 years for men.

(This is true irrespective if they own a VW Beetle.)

These traits are well documented to be among the traits that extend life, but much of this is on the margins – we’re not talking adding 20 years with these behaviors.

That said, there may be certain protocols that could possibly (maybe) add two decades, such as high interval intensity training, anti-oxidant focused supplementation (check out Aging… Let’s Slow it Down!), and choosing the right parents.

Yeah, even though behavior is of paramount importance, there are those few who have genetic gifts that seem to overwhelm any dumb habits.

You can think of them as being born Mercedes Diesels.

These people have scientists scratching their heads.

The relevant perplexity here is also the title of an article from which I’ll extract some of the following information, which is, How do Ashkenazim live long, despite bad eating habits?

Yeah, they Do Not, as a group, do all the good things behaviorally that do the 7th day people, but they have a gift, a genetic gift, which overwhelms many bad habits, on average.

The only consistent behavioral aspect underlying their longevity is their tendency to marry and procreate with one another, thus preserving the integrity of their longevity genetics.

Beyond that, in their case, genetics is the primary trigger of their guns.

But their good humor may play a role:

The Ashkenazi Jews’ “longevity gene” has been rigorously studied, and – notwithstanding behavior — has been found to be able to protect this population from cancer, heart attacks and other fatal diseases.

The rest of us need to pay attention to what we do.

This are what the 7th Day Adventists do, as well as other long-lived people.

The bottom line is that longevity is much about the choices we make.

Check out this video of scientists at the Buck Institute for Research on Aging about the secret to living a longer life.

May your lifespan be long and hale!