Are You Pessimistic About the Future? Watch the TED Debate 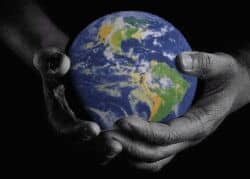 Two prominent men of science and environmentalism express their respective views about our future, earth’s future, and they’re miles apart.  Will tomorrow bring calamity or abundance?

JUST YESTERDAY at TED2012, there was a debate of sorts between, imprecisely speaking, a pessimist and an optimist.

We’re talking about the future of the world, and you in it.

I say “imprecisely” because Paul Gilding, the pessimist in this story, isn’t completely so; in fact, although he’s certain that a crisis is soon coming, he believes that humans will survive it. There’s some optimism in there.

But it’s Peter Diamandis who is the unadulterated optimist in this future of the world story, for his view is that the future will sparkle.

May I suggest that their views are worth your consideration?

Paul Gilding has been an activist and social entrepreneur for the last 35 years, and is a former CEO of several institutions, such as Greenpeace International, Ecos Corporation and Easy Being Green. His recently published book is called The Great Disruption: Why the Climate Crisis Will Bring On the End of Shopping and the Birth of a New World

Peter Diamandis holds a PhD from MIT, and is chair of the X Prize Foundation and Singularity University.

Mr. Gilding’s contention is that the earth has a finite capacity to feed and house the 9 billion people that will soon populate the planet, and that it’s a scientific certainty that the way the world economies are currently structured cannot persist. His TED talk is called, The Earth is Full:

So, who’s right? Which future do you think is likely, and why? Please leave your views in the Comments section below.

P.S. If you lean toward Paul Gilding’s world view, you’ll be interested in a few posts I’ve written that point to some resources that could help you along the forthcoming bumpy ride:

Japan Tsunami Creates Health Concerns… Are You Prepared? Clean water, food, medical supplies and shelter are among the top health concerns following a tsunami.  How would you fare if a tsunami or earthquake hit where you live?

Be Self-reliant – Be Prepared for Calamity Some resources to help bring you to self-reliance.

“10 Things to Learn from Japan” A Lesson for the World The calm, dignity, grace, order, self-sacrifice, ability, tenderness training, consciousness and media restraint so evident these past weeks in Japan as its people survive and rebuilt their society after the massive earthquake and tsunami presents a valuable lesson to the world.

Supplements and Food that Protect Against Radiation Poisoning This is a long list of supplements that are thought to offer some level of protection against radiation.  By and large, these are the very same supplements that are touted to clean and rebuild the body of toxins, as well as provide essential nutrition.

Japan’s Radiation Fallout – Protect Yourself! If you’re not familiar with potassium iodide, you need to be.  You may not live in Japan, but trust that most anywhere you live, there’s a chance for radiation to ruin your life.